Schultz said he personally asked COO Kevin Johnson to fill his shoes because he is a "true servant leader." 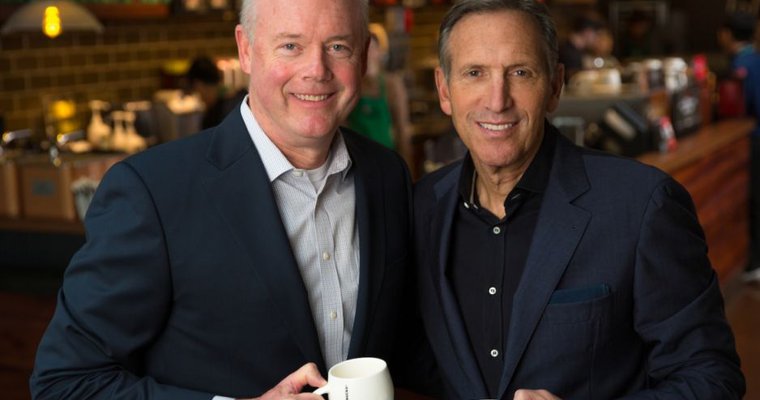 Howard Schultz is handing over his title of CEO to COO Kevin Johnson, effective April 2017.

Schultz will serve as executive chairman, shifting his focus to innovation, design and development of Starbucks Reserve Roasteries around the world, expansion of the Starbucks Reserve retail store format and the company's social impact initiatives.

"In all my years at Starbucks, I have never been more energized by the opportunities that lie ahead," Schultz said Thursday during an investor call, where he welcomed Johnson as CEO.

Schultz reminded investors on the call that three years ago he predicted the industry would have to embrace mobile technology and create destination stores to attract customers. Since making that shift, Starbucks has been consistently outperforming the retail industry because its "stores, offerings and the experiences its employees create make the chain a destination," Schultz said.

"The best evidence of the success of the core strategy driving our business is that we continue to deliver quarter after quarter of record, industry leading revenue, comp sales and profit growth, and that the newest classes of Starbucks stores continue to deliver record-breaking revenues, AUVs and ROI both in the U.S. and around the world," he said.

Schultz sees his new focus on growing Starbucks Reserves and Roasteries as the next step in keeping innovation brewing at Starbucks, saying those stores will showcase new coffee brewing methods and offer customers artisanal food choices from Italian bakery Princi, founded by Rocco Princi in 1986.

"We expect Starbucks Reserves to deliver twice the unit economics of standard Starbucks locations," he said.

As Schultz focuses on Starbucks' next wave of retail innovation he said he's delighted Johnson, the brand's current president, COO, and seven-year board member, has agreed to assume the duties of Starbucks CEO.

"This move ideally positions Starbucks to continue profitably growing our core business around the world into the future," according to Schultz, who told investors he had personally asked Johnson to take the job because of his innovative spirit that has led to the chain embracing mobile before its competitors. He also called him a "true servant leader."

Mobile payments now make up 25 percent of all transactions at Starbucks, while mobile order and pay make up 6 percent. Both Johnson and Schultz are committed to growing those numbers.

As president and COO since March 2015, Johnson has led the company's global operating businesses across all geographies as well as the core support functions of Starbucks' supply chain, marketing, human resources, technology, and mobile and digital platforms.

Johnson has been a Starbucks board member since 2009, and will continue to serve as a member of the board.

"Over the past two decades, I have grown to know Starbucks first as a customer, then as a director on the board, and for the past two years as a member of the management team," Johnson said. "Through that journey, I fell in love with Starbucks and I share Howard's commitment to our mission and values and his optimism for the future. It is an honor for me to serve the more than 300,000 partners who proudly wear the green apron and I consider it a privilege to work side-by-side with Howard, our world-class board of directors, and a very talented leadership team."

During the call, Johnson said he was honored to take over the role but realizes he has large shoes to fill.

"I do want to acknowledge the obvious. Howard is one of the world's most iconic leader," he said. "It's a privilege to work side by side with Howard."

Johnson's career spans 33 years in the technology industry, which included a 16-year career at Microsoft and a five-year tour as CEO of Juniper Networks. At Microsoft, he led worldwide sales and marketing and became the president of the platforms division. In 2008, he was appointed to the National Security Telecommunication Advisory Committee where he served Presidents George W. Bush and Barack Obama. He joined the Starbucks board in 2009 and the management team in 2015.

"Together, we will reaffirm our leadership in all things coffee, enhance the partner experience and exceed the expectations of our customers and shareholders," Johnson said. "We believe in using our scale for good and having positive social impact in the communities we serve around the world."