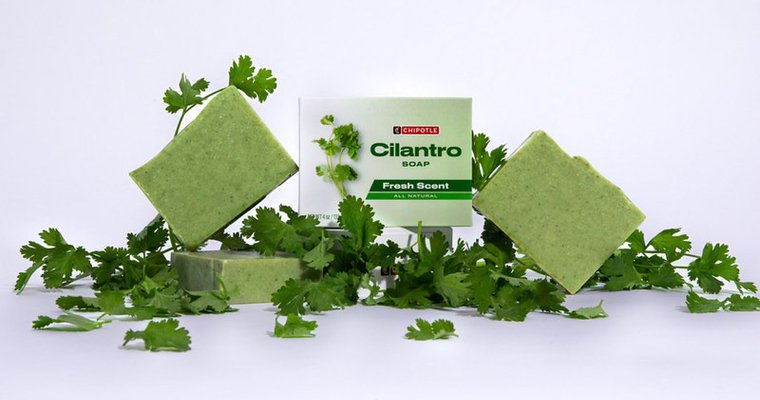 The soap was inspired by the fact that between 4 and 14% of the population is genetically wired to experience a soapy flavor when they eat cilantro, Chipotle CMO Chris Brandt said in a company press release.

"Our Cilantro Soap plays into a larger trend of turning digital moments into real-life experiences," he said. "Every Chipotle fan, regardless of which side of the great cilantro debate they're on, can appreciate this fan-inspired gift."

With several Chipotle menu items featuring cilantro, the fresh green herb has been one of the most debated ingredients among fans on social media. Over the years, Chipotle has addressed fans' love and disdain for cilantro in social media posts. The brand posted a mock Cilantro Soap package on Instagram in August 2021, which inspired the launch of the real soap.

Holiday drop
Along with Cilantro Soap, Chipotle has launched other Chipotle Goods products, including Iron colorways in its natural Chipotle Goods Avocado Dye Line, an open-looped collection of Chipotle-branded apparel that is dyed with upcycled avocado pits from Chipotle restaurants. Iron is mixed with Chipotle's avocado dye to create a rich grey/purple hue that brings an entirely new look to the line. Since each garment is individually dyed, no designs in the Avocado Dye Line are the same, according to the release.

Chipotle has nearly 2,900 restaurants in the United States, Canada, the United Kingdom, France and Germany.