Crackheads and Doughballs: Having fun in the fast (casual) lane

Crackheads and Doughballs — contrary to how they sound — are not insults. They're the names of the two latest fast casual brands dreamed up by James Markham, a California entrepreneur credited with helping create and take fast casual pizza to the masses. 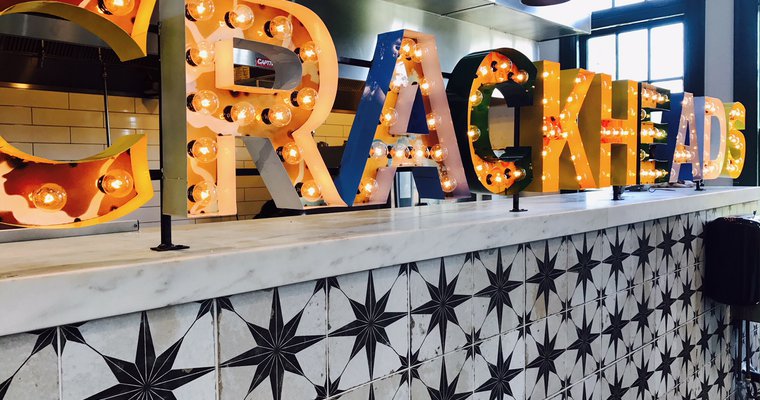 Crackheads and Doughballs — contrary to how they sound — are not insults. They're the names of the two latest fast casual brands dreamed up by James Markham, a California entrepreneur credited with helping create and take fast casual pizza to the masses.

"Now, you can't swing a dead cat 10 feet without hitting a build-your-own pizza concept, but back then,  it was new," said Markham, who told FastCasual he came up with the idea in 2007, while flying back from his restaurants in China.

Since then, Markham has founded and/or been involved with a variety of fast casual pizza brands, including Mod Pizza, Pieology, and also, Project Pie, which Pieology acquired last year. He cut ties with all of them, however, to focus on a few of his other brands.

"I was over pizza by then," Markham said. "I said I'd never do it again. I had stopped having fun."

Putting pizza behind him, Markham in 2015,  created Rolled Up, a sushi burrito concept in San Diego. Then, a few month ago, he launched Crackheads, an all-day breakfast concept inside a San Diego food hall — Liberty Public Market.

Burgers and pizza may be the most commonly eaten foods, but a segment that is even bigger than both of those combined is breakfast, Marham said. 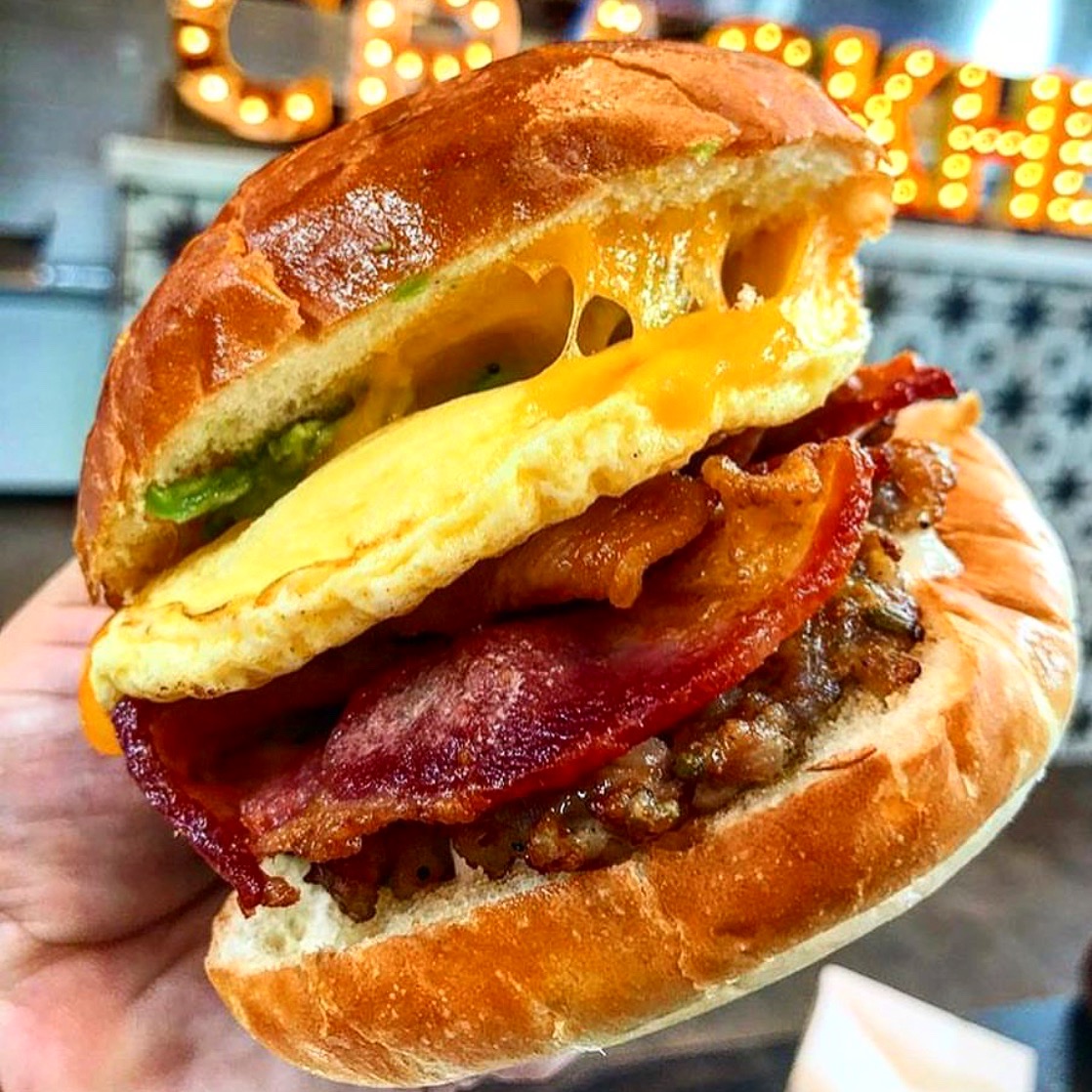 "McDonald's just proved it," he said. "They offered all-day egg McMuffins and are finally making some money again."

Markham looked at the market and saw no fast casual breakfast options. Customers only had QSRs and a few casual concepts, such as Snooze, an all-day breakfast eatery based in Denver.

"I love Snooze, but who has an hour-and-a-half to eat a big breakfast? There's nothing in the fast casual realm at all — nothing falls in between."

Markham changed that in August when he opened the all-day breakfast bar featuring breakfast sandwiches made with cage-free eggs, a build-your-own cereal bar with 10 toppings, customizable Pop Tarts and a variety of sweet and savory dishes cooked sous vide in recyclable mason jars. (Sous vide refers to the process of vacuum-sealing food and cooking it in a temperature-controlled water bath.)

That price point is $7 — tax included.

"The sandwiches are huge; they are the size of a burger but way cheaper," said Markham, who uses the tax-included model at all his brands. "Everyone in the fast casual space thinks you 'gotta' be in the $10-11 price range, but why isn't there anything lower?"

The jar options — which feature fancy options such as truffle-bacon mac-and-cheese and Japanese-style pancakes — have been so popular that Markham is now developing an entire concept, called Jarfoods, around what he described as an accident.

"I wanted to do eggs benedict in a mason jar," he said. "I kept screwing up the hollandaise sauce. I was half-buzzed on 'Jack' and diet, and I was cussing; I was so mad!"

After failing a few times, he cracked three eggs in a mason jar, added garlic salt, cheddar cheese and veggies, then threw in it all in a sous vide bath and forgot about it.

"An hour later, I remembered it, opened the jar and had the most perfect fluffy omelet ever," he said. 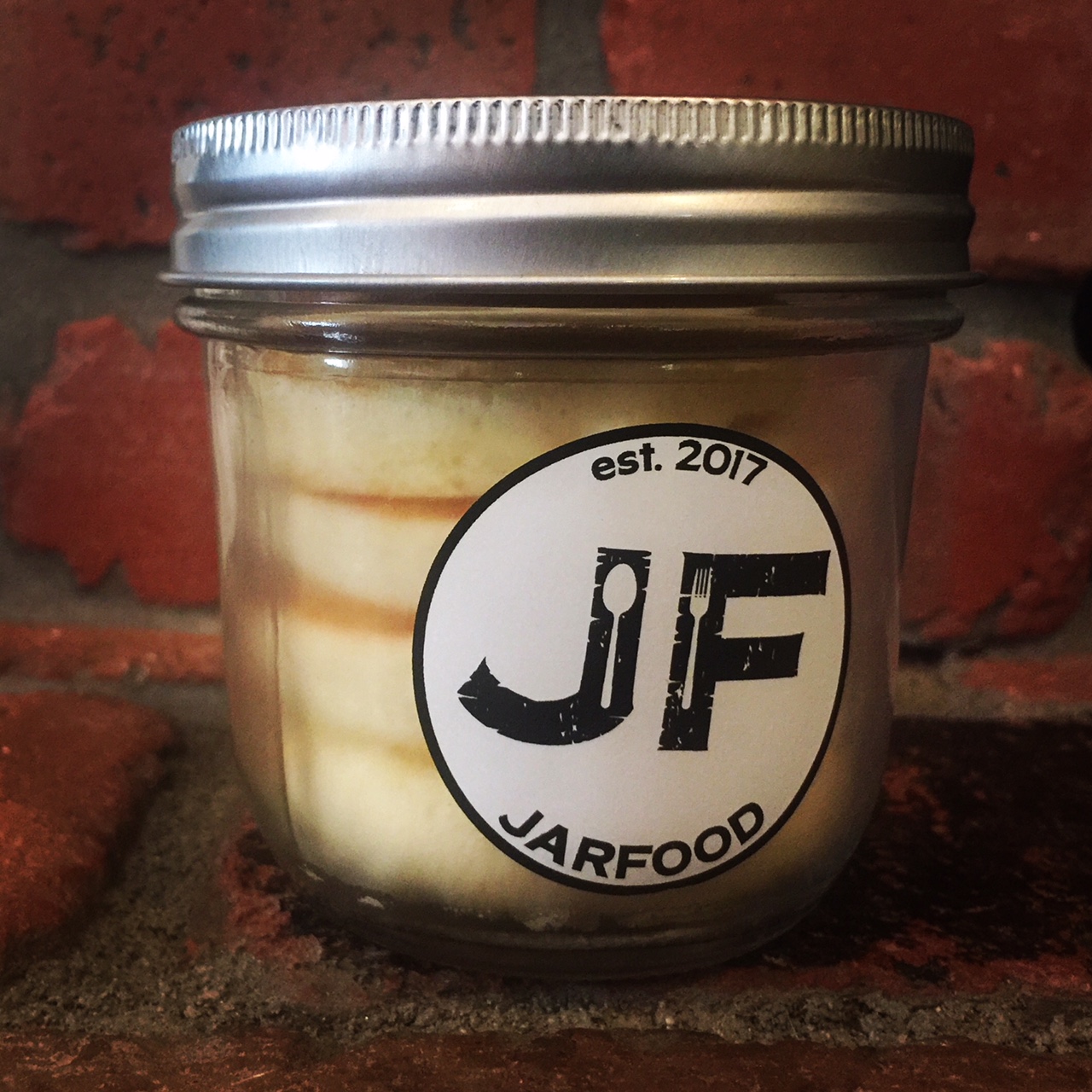 Markham mixed up two more and let them sit for about five hours. Those were also perfect.

"I was shocked. I didn't know shit about sous vide cooking, so I did some research. Sous vide is so cool because it's impossible to overcook. Once you set it on the temp, it doesn't go any higher."

Markham's next test was pancakes and eventually he found that using a 10-ounce jar worked best. He adds the pancakes and butter to the jar, vacuum seals it and then cooks it sous vide. When customers arrive, they simply open the lids and add their favorite toppings.

"Everything is already in these jars. When you walk up, you say what you want and get it in 20 seconds."

Rolling out Doughballs
Although Markham was having a blast with Crackhead, he quickly discovered that he wasn't actually quite "over pizza."

"I love pizza, but when I started in pizza, it was all about hand tossed — guys throwing the dough.  When I created Mod, Pieology and Project Pie, I wanted to get away from the skilled labor, so that's why he we did the dough presses. But when you do that, it kills the yeast and you end up with almost a flatbread. I wanted to go back to my (pizza) roots but didn't want to do any of that again." 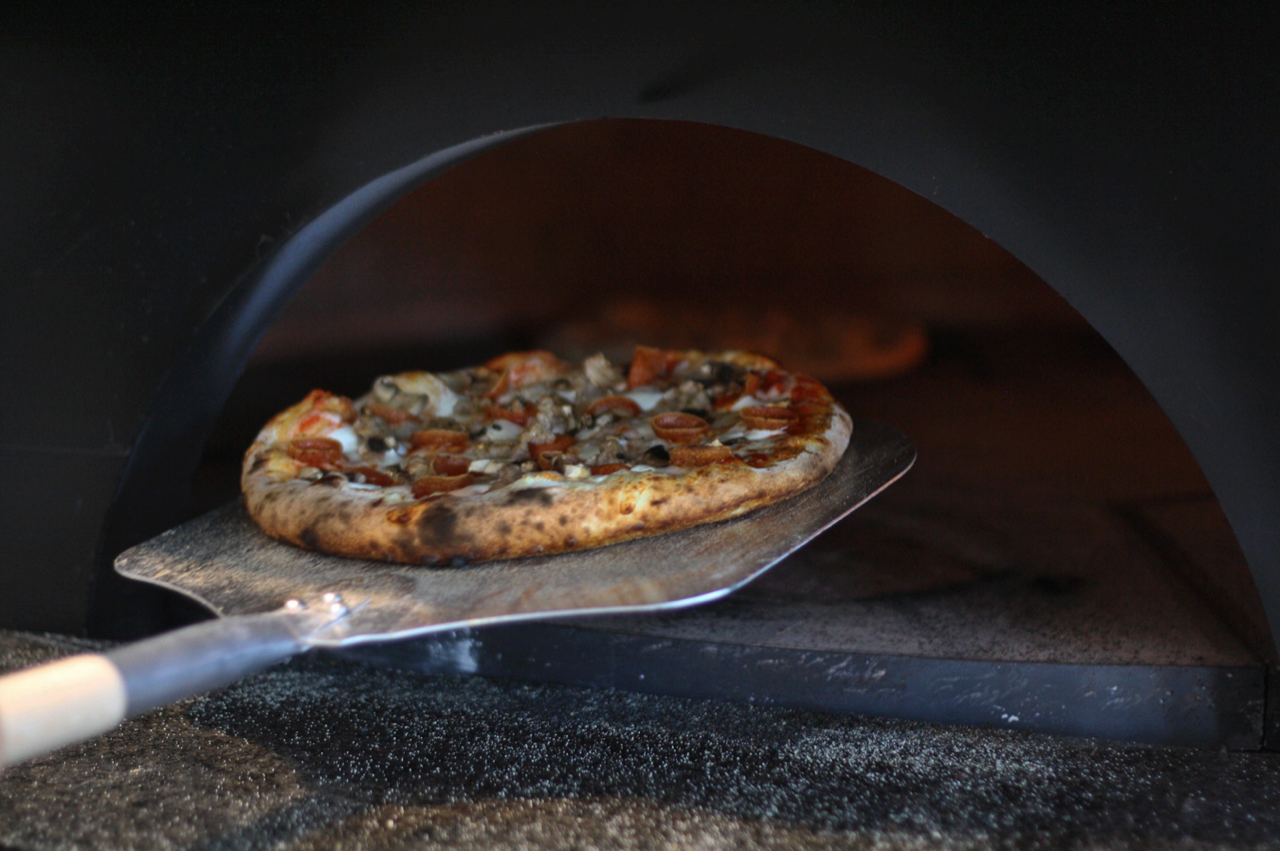 Hoping to offer a higher-quality pizza, Markham opened his wood-fired concept, Doughballs, earlier this year across from Crackheads inside Liberty Public Market. The concept uses a dual-fueled oven with gas and wood to cook the 12.5-inch pizzas in 90 seconds.

"Doing wood-fired is such a better product, and it cooks even faster — 90 seconds," he said about the pies that cost $11 — tax included.

What also differentiates Doughballs from its competitors is that customers don't walk the line. Instead, they use a pad of paper to check off what they want and hand it to the employee.

"This is faster. We get the ticket before you've even paid, and it also makes operations and calculating the cost of goods easier," Markham said. "It's all dramatically faster than what we were doing at Mod and Pieology."

Markham, who said he would never put Doughballs in a conventional space, is about to open a second location a half-block from the beach. It's a drive-thru-only unit, but workers will also walk the beach taking orders with iPads. They'll plant flags in the sand to show other employees where to deliver the pizzas.

"There's pizza everywhere, and this product is too special to just be in a normal spot," Markham said. "I know the product. I've created three other players, and this is far superior to those pizzas. I want the whole concept to feel more special because it is." 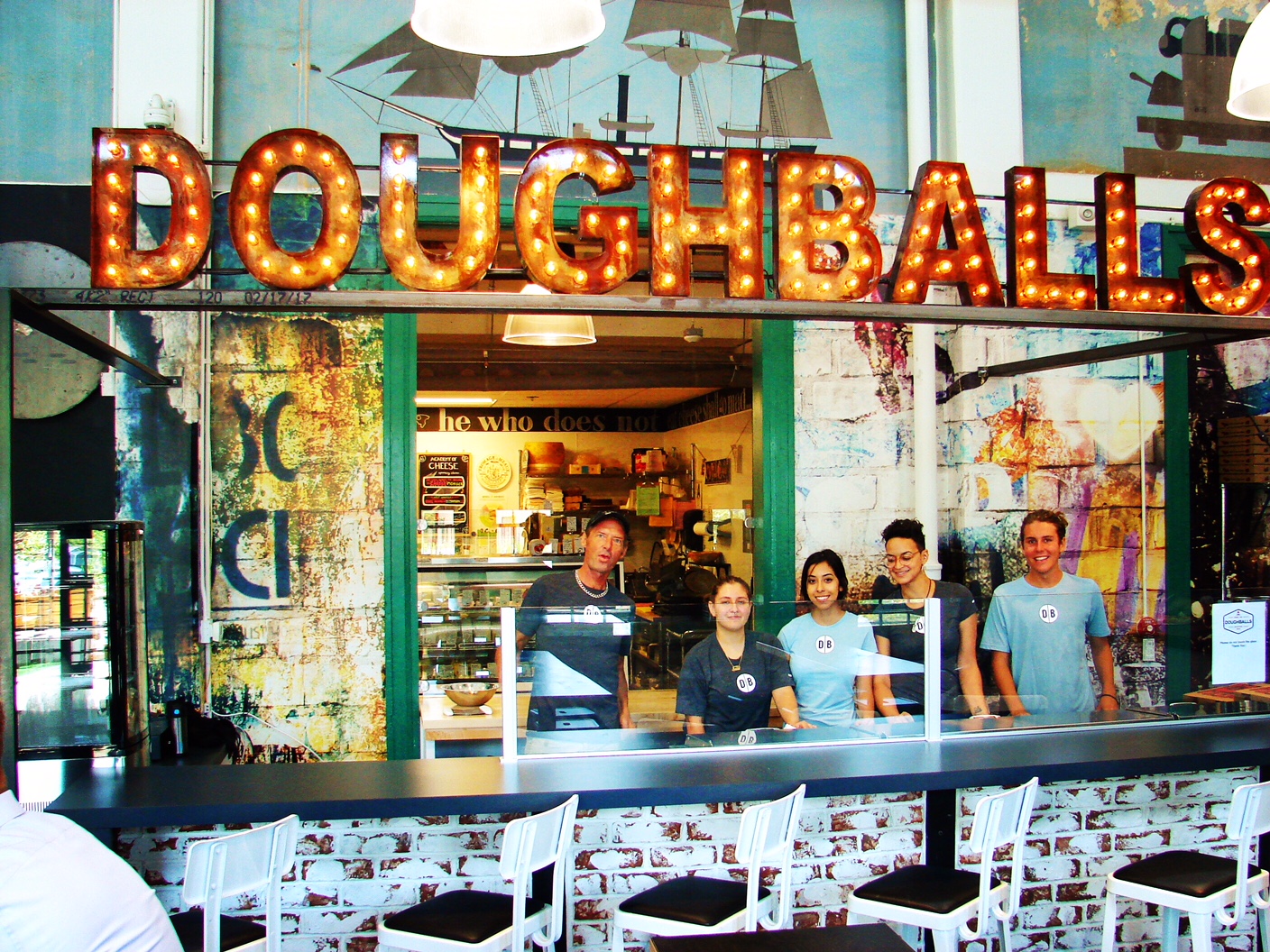 Saying no to franchising
Markham has no plans to franchise, although he believes that each of his concepts is "very franchise-able."

"I would let someone develop them for me, but I'm not franchising them. It's just not fun. It sucks."

Markham, however, is in growth mode. He's finalizing plans to open a food hall in Carlsbad that will include up to 12 fast casual brands, including Crackheads, Doughballs, Jarfoods and Rolled Up. The plan is to feature innovative brands serving high-quality food in a fun setting that will also showcase work from local artists and have several games for kids to play.

"It will be fun," he said. "What I like about all of this is that I'm back to having fun. I wasn't having fun, so what's the point? I like creating cool shit. That's fun."