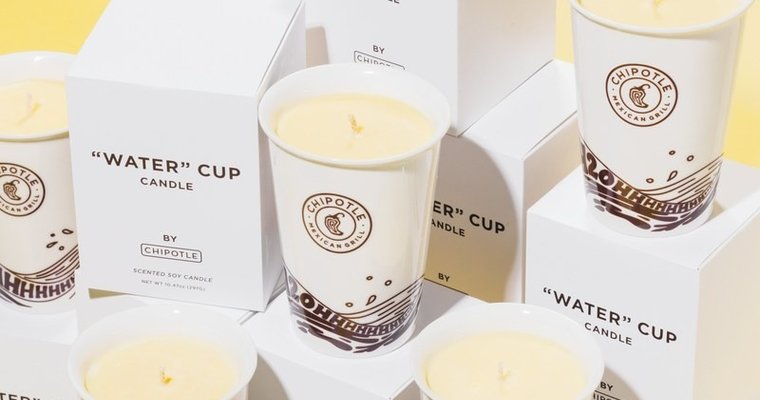 To celebrate National Lemonade Day on Aug. 20, Chipotle is launching a lemonade-scented candle inspired by fans who "accidentally" fill their water cups with lemonade, according to a company press release.

The limited-edition lemonade-scented soy candle, designed to look like a Chipotle water cup, will be available Thursday by 9 a.m. in the Chipotle Goods online store while supplies last. Each purchase will include a unique promo code redeemable for a free lemonade at Chipotle. The brand is launching the "Water" Cup Candle in honor of National Lemonade Day on August 20.

In response to fans' social posts about "accidentally" filling their free water cups with lemonade, Chipotle has acknowledged these "accidents" in a series of tweets over the years and manifested the candle in a post from December of 2019.

"Social is the premier destination for us to listen to and engage with our superfans," Chief Marketing Officer Chris Brandt said in the release.. "When they see these lighthearted tributes to social chatter and fan behavior, they feel even more connected to Chipotle."

This is not the first time Chipotle has turned an online conversation into a real product. In December 2021, it launched Cilantro Soap, which nodded to a small percentage of the population, who are genetically wired to experience a soapy flavor when they eat cilantro. With several Chipotle menu items featuring cilantro, the fresh green herb has been one of the most debated ingredients among fans on social media.

Chipotle also teamed up with Roy Murray, aka the "Chipotle Is My Life" Kid, for a limited-edition apparel drop as part of the Chipotle Goods collection in February 2021. Murray became an internet sensation in 2014 when he famously exclaimed "OMG, I love Chipotle. Chipotle is My Life!" on camera.

Chipotle has over 3,000 restaurants.