Why Rise Biscuits phasing out cashiers, leaning on self-service 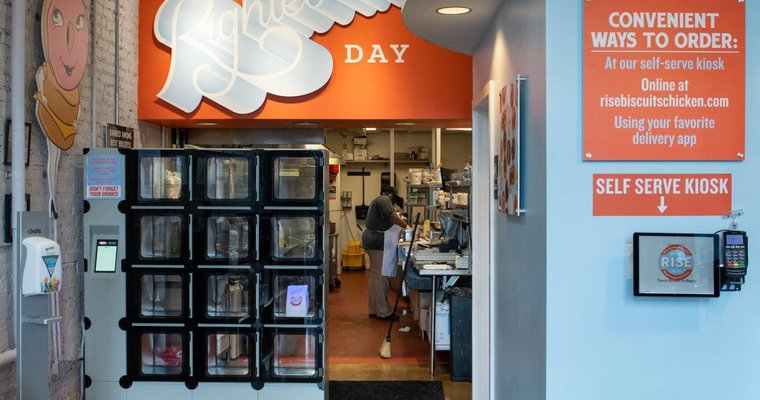 Rise Southern Biscuits and Righteous Chicken's 2014 decision to invest in a new POS provider — Revel Systems — couldn't have come at a better time. The partnership was the first step in the North Carolina-based chain's journey into self-service, which has led to online ordering, third-party delivery, iPad and kiosk ordering as well as a locker pick-up system deployed earlier this year.
Cashiers are a thing of the past at Rise, but more importantly, those operational advancements put the nearly 20-unit chain ahead of the game when the pandemic hit. As other restaurants scrambled to adopt online ordering and contactless pickup and delivery to survive dine-in bans and at-home mandates, Rise was in full swing.

"It's definitely helped us (during the pandemic) without a hitch," Ken Priest, CFO and co-owner, said in an interview.

In search of efficiency

When the partners were exploring POS systems in 2014, they did not anticipate a COVID-19 situation that would require them to close in-store dining. The company had been in business for two years and was looking for a system that would support a "plug and play" offering for franchisees.

"Our goal was to get as automated as possible in our realm, and that was embracing as much technology as we could," Priest said during a phone interview.

Revel Systems offered a kitchen display system in addition to POS, which was a crucial consideration, said Priest.

"It increased our efficiency in the kitchen tremendously," Priest said.

In 2015, Rise deployed a self-order iPad in addition to its two cash registers in its store.

"We were just dipping our toe into online ordering at that time," Priest said, "And we were using a third party company."

Getting that company to make menu changes quickly was a problem, however.

"That was the reason I brought online ordering into Revel because whatever changes I make on the POS happen instantaneously online with the online ordering system," Priest said.

Although the team hoped that regular customers would use the kiosks, only about 5% did at first.

"We were early to the party with that," Priest said.

Customers were also slow to accept third-party online ordering, which Rise introduced in 2015.

Kiosk and online orders take over

By 2018, kiosks and third-party online orders accounted for 80% of the orders, even though there were still two attended registers in the stores. Of that 80%, kiosk was first, third-party delivery was second and online ordering third.

"We needed to make a change," Priest said. "It's hard for us to justify having register people being there for 20% of the orders."

So the company added another kiosk and removed one of the two manned registers, which didn't impact the sales but eventually proved more profitable. For the first three months, an employee was on hand during busy periods to help the customers with the kiosks.

"We spent a ton of money educating," Priest said.

As franchisees came on board, they were required to have a self-order iPad in addition to the manned registers. Franchisees were okay with it since the expense was not great, Priest said.

Rise has since moved the kiosks to the front and center of the store, added a customer loyalty program, launched a digital gift card and introduced its own online ordering — managed by the Revel software.

"That is one of the attractions of using all of Revel services; everything talks together," Priest said.

Customers may now pay at the kiosk or online using loyalty points. They may still use cash, but there are at least two kiosks in every store, and previous counter clerks are filling other roles.

Rise recently deployed Revel's heated locker systems, which cost about $18,000 each, at two locations with plans to add it in three others by year's end.

"The lockers are glass cubicles stacked on top of one another, each equipped with its own heating system to keep food piping hot, even if you pick up your order an hour after it was made," said Rise CEO and Founder Tom Ferguson.

The lockers have led to an increase in business.

"Most importantly, I attribute this increase to the ease of usage and knowing your order will be ready and hot when you come to get it," he said.

Technology to the rescue

Although the pandemic was a setback for Rise as well as nearly every other restaurant around the world, Ferguson's investment in technology made it short-lived.

Four weeks after the coronavirus first hit, for example, sales were back to pre-COVID numbers, and the team has kept all locations open.

Although he couldn't comment on the overall cost of the technology rollouts implemented since 2014, Ferguson said they've been well worth the investment as the business continues to improve, and sales are ahead of where they were last year at this time.

INCLUDED IN THIS STORY

Revel Systems is an intuitive, cloud-native point of sale (POS) platform that integrates inventory management, employee management, robust reporting, and much more into a single platform.