Although Thursday marked the first official day of fall, restaurants around the world didn't wait to launch their pumpkin-flavored LTOs with good reason. Pumpkin is still a huge traffic driver. 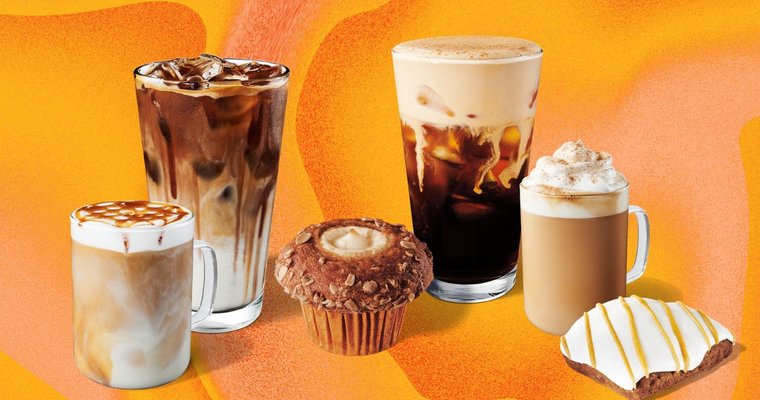 Although Thursday marked the first official day of fall, restaurants didn't let that keep them from launching their pumpkin-flavored limited-time offers.

There's a good reason for that, according to foot traffic analytics firm, Placer.ai, which revealed in its report, "There's Somethin' About Pumpkin," that brands often receive major boosts from pumpkin-flavored drinks.

Visits to Starbucks were up 25.7% this year during the seven days after the chain launched its fall menu, compared to the average weekly visit numbers for the previous five weeks. During that same stretch, visits were up 7.5% compared to 2019's numbers, too.

There was a similar dynamic at Dunkin,' where visits increased 9.5% this year during the seven-day stretch after its fall menu launched, compared to the average weekly numbers for the prior five weeks. And visits were up 5.8% during that same period compared to 2019.

This trend isn't only true for the biggest brands. SpotOn, for example, saw around 300 restaurants add over 1,000 "pumpkin" items to their menus. Nearly 40% were pumpkin-flavored beers, and 10% were pumpkin spice.

"For many, the availability of pumpkin products signifies the changing of the seasons, and after one of the hottest summers on record, we're all ready for fall and its crisp weather," Kevin Bryla, SponOn's CMO and head of customer experience, told FastCasual. " Pumpkin spice and other fall flavors aren't available all year round, so there's a sense of urgency for customers to get it while they can.

"For restaurants, pumpkin and other fall ingredients are incredibly versatile and can be used in nearly every concept, from pumpkin spice lattes at the local cafe to autumnal pasta at a fine-dining restaurant. By introducing a seasonal, limited time offer (LTO) supported by proper marketing to guests, a restaurant can drive sales from late August well into November."

It's not only pumpkin season, is it?

Although more brands than ever are embracing the pumpkin obsession, a few are also adding other fall-inspired flavors. Panera Bread, for example, has created a Cinnamon Crunch Latte and Starbucks is pushing an Apple Crisp Macchiato and the Salted Caramel Mocha. Shake Shack has created the Apple Cider Donut and Choco Salted Toffee shakes to go along with its usual pumpkin LTO, and Tous Les Jours, which has nearly 1,600 locations around the world, is debuting an Apple Pie Steamer along with the Pumpkin Pie Macchiato.

Still, few will argue that pumpkin is still the queen of the season, so below are just a few LTOs starring Fall's favorite gourd.

Caribou Cofee is giving customers 10 ways to get their pumpkin fixes this season. They include the:

Those looking to have Caribou's seasonal offerings from the comfort of their home can purchase the newly released limited-time
Pumpkin Love ground bagged coffee, a medium roast coffee featuring flavors of pumpkin, warm spices and a dollop of whip cream.

Founded in 1992, Caribou Coffee has 325 company-owned and 139 non-traditional locations nationwide, and 274 franchised stores in nine countries

"Fall is one of the best times to cozy up with a warm, fresh-baked treat, and the Cinnaholic team is so excited to bring back our fall menu items to satisfy seasonal cravings," Leanne Cavallaro, VP of Operations at Cinnaholic, said in a company press release.

Since its inception in 2010, the brand has opened more than 75 locations.

"Everyone always looks forward to our seasonal flavor offers, but especially Fall, because it's real, all-organic creations featuring real pumpkin!" Landon Eckles, CEO of Clean Juice, said in a company press release. "At Clean Juice, we are 'Pumpkin up the Jam' by offering our guests a truly healthy."

The Brulee features pumpkin and salted-caramel flavors topped with pumpkin drizzle, raw sugar and Dutch Bros' signature Soft Top. It can be ordered as a Cold Brew, Breve or Freeze (a blended coffee drink).

The Sweater Weather Chai features white coffee and white chocolate topped with Soft Top and cinnamon and nutmeg sprinkles. It can be ordered hot or iced.

Haggen-Dazs has created a Pumpkin Spice Shake available now through Nov. 14 in its 200 shops across the U.S., according to a company press release.

The shake features pumpkin pie spices and real pumpkin puree blended with the brand's signature Dulce De Leche Ice Cream. It's topped with whipped cream and finished with a dusting of pumpkin spice.

Juice It Up
Juice It Up is offering its rewards members the chance to order its fall-inspired LTO, the Pumpkin Pleaser, as well as the Pumpkin Brew smoothies. Available now through Oct. 31, the two limited-edition pumpkin smoothies are available only on the app.

"Since launching our Juice It Up Rewards app, we've connected more frequently and effectively with our most loyal guests, and we've rewarded them with perks like access to exclusive rewards, and in this case, exclusive menu items," President and CEO Susan Taylor said in a company press release. "The Pumpkin Pleaser Smoothie and Pumpkin Brew Smoothie are the perfect ways for us to 'treat' our customers, usher in autumn and prep for the holiday season on the horizon."

With more than 100 locations open or under development across California, Arizona, New Mexico, Oregon and Texas, Juice It Up is featuring a new restaurant design, strong digital mobile ordering technology, a heavier focus on functional products and ingredient transparency, and a menu refresh, according to the release.

For pumpkin spice lovers looking for a healthier fall treat, Nekter has created "Pick the Pumpkin," a campaign that allows customers to indulge in the season's iconic flavor while also supporting their individual journeys to wellness.

"While we all crave indulgences, especially now with the arrival of pumpkin spice season, we wanted to offer our guests a healthier alternative to enjoy fall's favorite flavor," Alexis Schulze, co-founder and chief visionary officer, Nekter Juice Bar, said in a press release. "With our four craveable Pumpkin Spice menu items, guests not only feed their cravings, but they are also helping to build immunity and increase energy without highly processed or unnecessary ingredients. Pumpkin offers so many incredible benefits, which is why we make our Pumpkin Spice specials with real pumpkin — not syrups or artificial flavors."

Nekter has 180 locations and is on track to open its 200th location before the end of the year.

Available in 10- and 8-inch Bundt Cakes, as well as mini Bundtlets and bite-sized Bundtinis at all 440-plus Nothing Bundt Cakes bakeries across the country, guests may order them through Dec. 4.

PJ's Coffee
PJ's Coffee is toasting the end of summer with the return of its autumn flavors, available now through Oct. 31, including the Pumpkin Latte, which features the chain's Espresso Dolce with any choice of steamed milk, sweetened with a full-bodied Pumpkin sauce and dusted with cinnamon. It's also serving Pumpkin Sweet Cold Foam, made with PJ's Original Cold Brew with a sweetened Pumpkin sauce stirred in, embellished with pumpkin sweet cold foam and lightly garnished with real cinnamon.

PJ's Coffee has over 145 locations.

Shake Shack
Shake Shack has a trio of fall shakes and one is heavy on the pumpkin. The Pumpkin Patch Shake features 100% pure pumpkin puree hand-spun with vanilla frozen custard, cinnamon and nutmeg, topped with whipped cream and candied pumpkin seeds, according to a company press release.

Based in NYC, Shake Shack has over 250 locations.

Salata
Salata, a built-to-order salad kitchen with over 80 locations, has debuted its Pumpkin Puff Cookie, made with large pieces of macadamia nuts, white chocolate chunks and a hint of cinnamon in every bite. The cookies are baked fresh in-restaurant daily.

"With pumpkin flavored treats trending each fall we wanted to find a creative way to get into the movement as a salad company," Michelle Bythewood, president of Salata said in a company press release. "Our cookies are very popular amongst our guests, so the Pumpkin Puff Cookie felt like a natural extension of that offering and it's a great way to get your fall fix as a treat along with any Salata salad or wrap."

On Sept. 30, Salata will offer a free Pumpkin Puff Cookie to all guests who are signed up for its Tastemaker Rewards program.

Smoothie King
Smoothie King is bringing back its limited-time pumpkin smoothie line-up that includes the Pumpkin Coffee High Protein smoothie, made with organic pumpkin puree that contains 12 grams or more of protein. Options include the:

Smoothie King has over 1,300 locations worldwide.

Tous Les Jours, a French-Asian bakery chain serving over 300 artisan pastries, cakes and desserts, has added fall beverages to the menu, including a Pumpkin Pie Macchiato, featuring pumpkin, brown sugar, hazelnut and caramel paired with coffee and topped with a caramel drizzle.

"Accentuating the creativity that's baked and blended into our brand DNA, we opted to deviate this year from tradition and abandon anything resembling a common coffee with pumpkin and spice flavors — while still offering appealing fall-inspired beverages that are ideal for cold nights by the fireplace, brisk afternoon walks through the leaves and chilly car rides to work or school," Sue Han, marketing manager, said in a company press release.

INCLUDED IN THIS STORY

Dunkin’ is the name guests know and love. We’re franchising full steam ahead in markets nationwide, bringing our iconic brand and unbeatable benefits to entrepreneurs like you. From our premium coffee and baked goods to being a part of the Inspire Brands™ family, there’s a lot to love about franchising with Dunkin’.

Which Wich: Get your 'bread in the clouds'Pumpkin LTOs still boosting trafficZaxby's launching 'saucey' popsicles
White Paper
Increase Sales via the Drive-Thru Lane with these Leading Trends
View More On Food & Beverage