Angelo Amador, executive director of Restaurant Law, and Paul DeCamp, a partner in the Epstein, Becker and Green PC law firm, explained how employer liability has changed in recent years during the National Restaurant Show in Chicago. 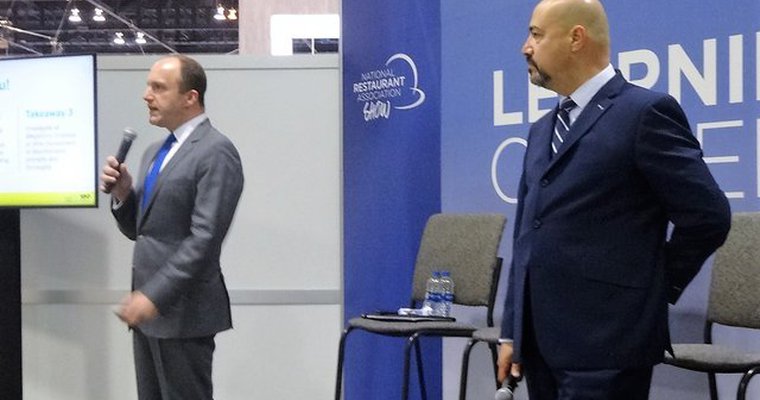 Most business owners in the service industry recognize their employees as their greatest assets. What many may not realize, however, is they can also be their greatest liabilities.

Legislative and regulatory initiatives now restrict what employers can ask job applicants, and many employers are not aware that they can be subject to penalties for asking questions about criminal records, salary history and credit history. Angelo Amador, executive director of Restaurant Law, and Paul DeCamp, a partner in the Epstein, Becker and Green PC law firm, explained how employer liability has changed in recent years during the National Restaurant Show in Chicago.

In addition to questions employers can no longer ask applicants, the employment law experts discussed non-compete agreements, changes related to sexual harassment, drug use in the workplace and overtime pay.

Aspects of employee's history off the table

The speakers' first suggestion was not to ask job applicants for any history regarding pay, criminal activity or credit.

Approximately 15 states and 12 cities specifically do now allow employers to ask an applicant's pay history, DeCamp said. Employers can ask about the applicant's pay expectations, as well as deferred compensation and offers from other employers, he said.

States are also prohibiting employers from asking applicants about their criminal history, he said. However, the employer can ask about this once a conditional employment offer has been made, depending on the particular jurisdiction.

"You need to ask if your local law allows it," Amador said.

The federal government excuses itself from this restriction, Amador noted, as government job applications do ask questions about the applicant's criminal history.

Watch out for non-competes

The second tip offered was to be careful asking employees to sign non-compete agreements, even when trying to protect confidential business information, DeCamp said.

This year, he said, about 20 states announced plans to restrict non-compete agreements. This legislation has focused specifically on national fast food and retail businesses, DeCamp said.

Some states allow some degree of non-compete if it is reasonable, he said. If you think a non-compete is important for a certain position, DeCamp suggested specifying the type of work that is subject to non-compete as narrowly as possible. You need to be careful not to limit what the employee can do once they leave your employment, he said.

Last year, Washington's attorney general cited more than 50 chains for no-poach agreements, securing settlements with the companies, DeCamp said. This year, he said, several restaurant chains signed an agreement on such provisions with attorneys general in 13 states and the District of Columbia.

What the me-too movement means

The third tip offered was to recognize the "sea change" brought by the me-too movement and to treat sexual harassment complaints seriously.

"Things have changed incredibly because of the me-too movement," DeCamp said, even though sexual harassment law itself has not changed.

What has changed is public perception of sexual harassment due to revelations about harassers who settled instances confidentially over an extended time period.

"Something that seems like no big deal can become a big deal over time," DeCamp said. "It's very important to view these things as a big deal."

"You need to train your employees and your managers about sexual harassment in a way that makes sense to them," he said.

The speakers encouraged their listeners to think about sexual harassment not only from the standpoint of what is legal, but what a potential customer or a jury would expect a responsible business to do when faced with a complaint.

Some states have outlawed non-disclosure agreements that relate to sexual harassment, they noted.

What about substance abuse?

Unfortunately, it is not clear when employers can discipline employees for using marijuana in cases where the state legalizes its use. In addition, federal courts have issued conflicting rulings about the preemption of the federal law prohibiting its use.

In a state that allows recreational marijuana use, a company that prohibits employees from using it before coming to work would be in violation of state law, DeCamp said. He said the company could prohibit the employee from performing their job if their performance was impaired.

Marijuana isn't the only drug causing complications for employers. Opioids have become the most abused illegal drug, DeCamp said, and two-thirds of those misusing opioids are employed. This is a serious issue, as nearly a third of employers have reported impaired work performance caused by opioids.

The Americans with Disabilities Act restricts employers from asking medical questions or requiring a medical exam, DeCamp said. The law allows testing for current illegal drug use, but it is difficult for tests to distinguish between past and current consumption.

The final tip concerned overtime pay. The speakers advised listeners to be ready for an increased minimum salary to qualify for overtime exempt status. The U.S. Department of Labor on March 22 released a proposal raising the minimum salary for overtime pay exemptions from $23,660 to $35,308. In addition, the threshold for the highly compensated exemption rises from $100,000 to $147,414.

DeCamp encouraged listeners to have policies in place before problems arise, refrain from asking about pay or credit history, refrain from having non-compete agreements, and investigate all sexual harassment and discrimination allegations promptly and thoroughly.

Amador added that employers should be consistent with how they treat their employees.

Is the honeymoon over for the fast casual segment?